Kat felt Linda’s broad shoulders and well defined muscles come in to play and slowly edge her hips toward the ground. She struggled in desperation, pushing back at her straining enemy and even gaining ground for a few moments. But Linda pushed back even harder, straining both Kat’s arms and legs as she painfully began to roll on top of the groaning redhead. Linda shoved forward, pushing Kat’s shoulders to the ground and smashing the redhead’s nose with her onrushing forehead.

Kat heard Linda’s yelp of triumph as she felt the blood running out of her nose. She was not gonna lose to this bitch, not gonna let her strip her, or worse, in front of Brad. Linda was caught off-guard as Kat bucked her hips fiercely and yanked her shoulders forward at the same time. The brunette lurched forward, trying to push Kat back down. Suddenly her head was filled with pain.

Kat had raised her head enough to grab Linda’s nose between her teeth. She sunk them in deep and held on. Linda was screaming so loud, Kat began to worry that some adult was going to come running but she couldn’t blow her chance now. Releasing her death grip she rolled over on top of the crying brunette. She wrapped her legs around Linda’s to avoid her kicking or bucking and then pushed her shoulders firmly into the grass.

Kat looked down on the mess she had made. Linda’s cheeks were covered with blood and tears. Her nose was swollen and red, she’d ripped out a line of flesh across the nose and it was bleeding pretty good. Kat was feeling to battered and weary for pity. She noticed the brunette wasn’t even struggling beneath her, just sobbing and gasping for breath, probably worried about her pretty face. Kat fought to find the breath to say three simple words.

Now Linda started to thrash beneath her. Kat rode the rocking brunette a few moments and edged forward. The redhead lifted her hips, paused a brief moment and then slammed her butt down hard on Linda’s belly. Linda gasped and began to fight for air.

Kat stared down and smiled.

“I asked you a question”, she stated.

Linda was still gasping. Kat heard the brunette wheeze a murmured “OK”. That wasn’t going to be good enough. 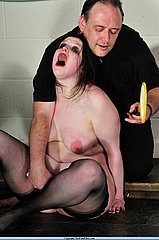 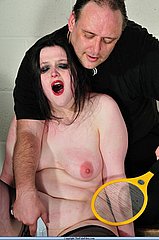 “What? I don’t think Brad heard you.”

Linda was still struggling to inhale. Kat raised her hips for another slam.

“I give up!” Linda hastily moaned.

Kat staggered to her feet. Linda rolled over on to her stomach. Kat flicked forward a foot and raised Linda’s skirt. She kicked the panty-clad ass and looked toward Brad.

He was smiling as she staggered towards him.

Wanna go from kinky stories to real action ? Try out the Hardcore Flesh Free and Pay Per View Videos and Movies for a wild ride down fetish lane!